Snowdonia is one of the most beautiful places I have ever seen in North Wales. After having trekked Mount Snowdon, a super exhausted me lay in the warmth of my bed slowly floating into the fluffiness of my comforter. The next and my last day in Betws y Coed didn’t have much planned except a Zip Safari close by at 11 a.m. followed by a long, leisurely walk in the Bodnant Gardens popular for their historic plant collections, champion trees and a myriad of horticultural styles. I was looking forward to an easy, spaced out day. With that thought, I drifted off to sleep. 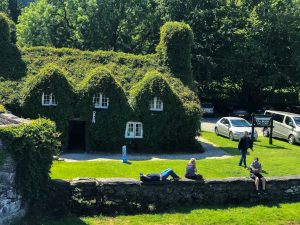 The connection in Betws y Coed is weak and the last couple of days had been a retreat in the true sense, unplugged from the real world. So, at 5 a.m. when the mobile beeped frenziedly I woke up with a startle and reached out for it, a tad irritated and a bit excited. There were messages from K.B. in Delhi asking me “How far are you from Llanwrst? ” “What’s the plan for the day?” “A Zip and Gardens, right?”  I barely managed to ask “Why?’  when he replied ‘You gotta do this.” And he sent me a picture of a quaint, whimsical cottage completely blanketed in creepers (courtesy Google Images). Fascinating!! Two more messages followed: One giving me the directions to reach there and the last one which said “See it in real. Have the scones.” That’s my family for you. Even if they’re not physically present, they’ll take the journey with you equally excited and participative. Now Tu Hwnt I’ Bont was a definite add-on to do. Tu Hwnt I’r Bont is an idyllic, enchanting cottage right out of the mystical fairy tales. The cottage is swaddled in a luscious thick blanket of green creepers but as the temperatures cool in the winter months, I’m told, the colors of this carefree ivy turn a brilliant crimson. In 1480, Tu Hwnt I’r Bont  (meaning Beyond the Bridge in Welsh) was built as a residential dwelling and is actually considerably older than the 18th-century  stone bridge it sits next to. Recently taken over by the National Trust, it is now a tearoom, widely renowned for its cream teas, secret recipe scones, freshly made bara brith, sandwiches, traditional Welsh Rarebit and its homemade jams and marmalades. A relatively small place, its interiors are cozy and vintage with old hardwood tables, low beams, Welsh dressers and a  rustic display of copper utensils and big brass plates. A lovely, big inglenook fireplace adds to the charm. The staff was busy but carried the warmth the Welsh are known for. A narrow winding staircase leads to a photography exhibition and restrooms on the first floor. The cafe has its limitation in its covers, but I managed to get a seat right away,  sharing the table with an elderly couple. Having grown up on a steady diet of Enid Blyton’s books, the scones described in her books ruled my imagination. I ordered cream scones and my pot of hot tea. The crumbly, buttery scones were freshly out of the oven and served with jam and cream. They were utterly delicious and light with a  golden brown floury top and bottom with white sides. The tea, a blend was both smooth and robustly flavorful. The fine blue china and fragile teacups added to the wonderful teatime mood. Satisfied, I paid the bill, stepped out, soaked the landscape for a few more seconds and moved on.